I’ve been back home for merely 24 hours. The first day home after a trip is always curious, the transition, the counting back in time – what was I doing at this time two nights ago? I was sitting in the dining room in the cabin, sipping on a cup of instant 3-in-1 coffee, revisiting part of the story of Murder on the Orient Express by Agatha Christie, chatting with the host, playing with Lumpi the cat… Yet here and now, a to-do list is waiting for me to get on with it – clearing my suitcase, cleaning my boots and poles, transferring photos from camera to PC – which I did just now. Then I wondered, what did I really feel like doing at this moment? I knew what I wanted to do, I wanted to fetch the left over instant coffee from my suitcase and make myself a cup. Along with that I wanted a few gulps of Scotch whiskey and to write a few paragraphs in my favororite word processor. So here I am, whiskey, instant coffee, OmmWriter, headphones, check check check.

Why would I even come across the idea of drinking a cup of instant coffee when evidently, better options are available? Obviously, it isn’t about the coffee itself, it is about what I had been drinking at night in that cabin at the foot of the mountains.

I’ve slowly come to realize, what’s the most precious about this trip – or any trip, has not much to do with the breathtaking views after a streneous climb – at least I wouldn’t be able to remember all of them without going through the photos. What I would treasure forever are moments, which at the time of occurance, did not seem to be significant: the peaceful evenings in the dining room; the mornings when I listened to ‘Mystery of Love’ by Sufjan Stevens while tidying myself up; the warm bread, butter, and strawberry jam at breakfast; the most scary incident as I had to pull myself up a wall of snow and ice – and the things I thought about doing if I could make it back in one piece; the lunch under the roof of a wooden hut with a friend as rain clouds closed in upon us…

Now, here’s to you, the Alps, my favorite place on this planet, where indulgences do not come in abundance and hearts remain real.

Day 1: I arrived in Baad on Sunday evening. After settling everything down at the cabin, I went out for a walk just to get to know the surroundings.

Here you see the entire village of Baad at the very end of Kleinwalsertal. The church, the bus stop, the cabin I was staying at – I can see them all from here. This is literally where the road ends. Thereafter, only mountains and forests.

Day 2: what a sunny morning, I went behind the cabin and started my way uphill.

Somehow it completely skipped my mind – I forgot how much snow was still lying around at this time of the year once above 1500m. It was not a big issue in the beginning since I could still see and follow the path. 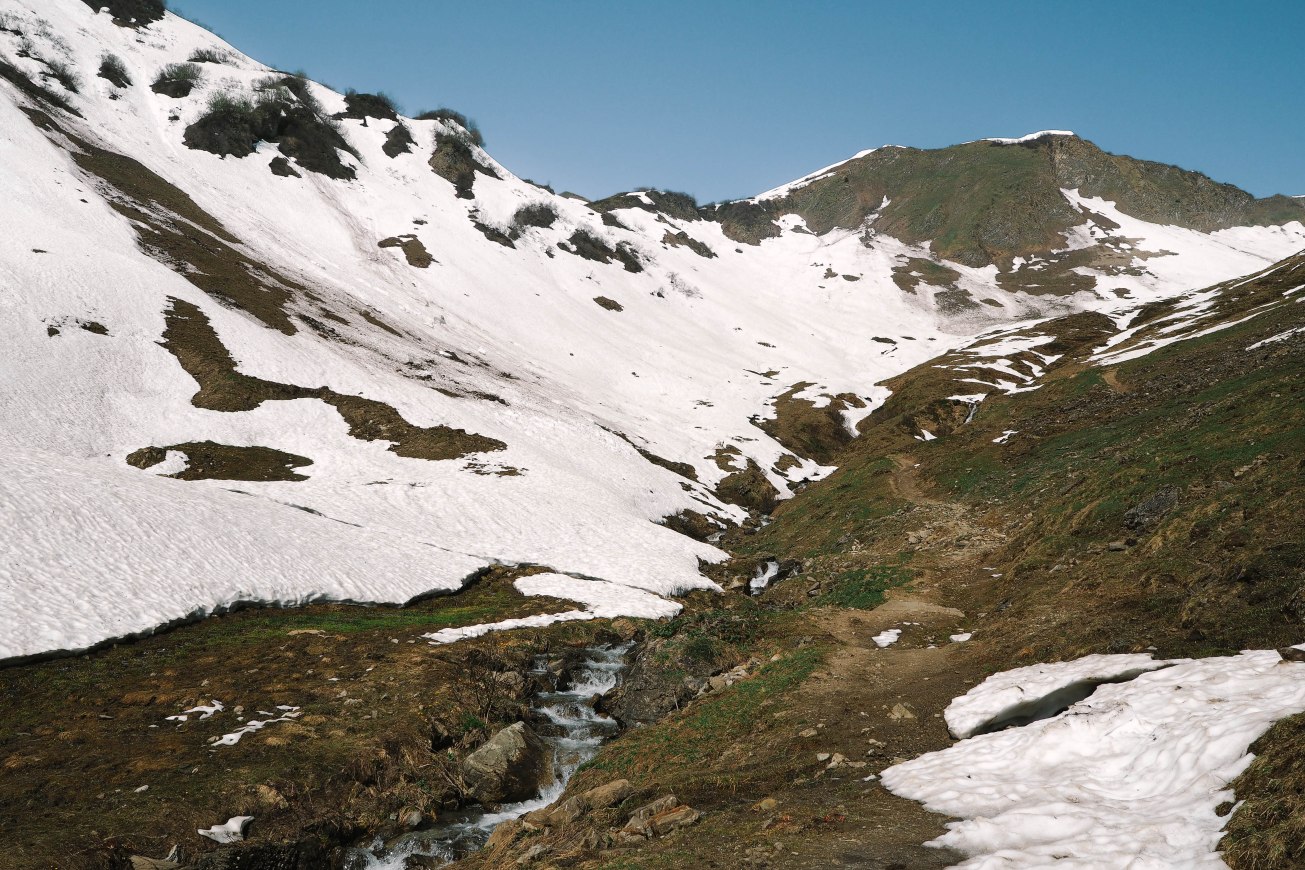 Gradually it became more of a problem…

The snow covered completely the ascending path, meaning I could not find it anymore. However, I could see two huts sitting on top of a steep slope, and decided to just go up straight in the snow. That was a steep workout, the snow was not firm anymore which made it very easy to slip.

I reached the two huts (not pictured) only to find out that the roofs were still buried in snow – that is how much snow there was! Nonetheless, let me try to get on the ridge, there doesn’t seem to be much snow.

Now standing on the ridge. There was not a single sign or marker, I couldn’t tell which way I should be heading. In fact, at the very end of the ridge pictured here (visible when zoomed in), there is a cross which I finally managed to get to on all fours…

There it is! Very interesting terrain here – in some parts the rocks went up vertically. Although I usually get pretty uncomfortable in climbing halls, a little bit of (not so much that it requires protection) rock climbing out in the nature spices it up just the right amount. Once I got to the cross, I found no mentioning of the name of the peak or the altitude, they were nowhere to be seen. Then, I spotted a metal box mounted below the cross, inside which I found a small notebook protected by a plastic bag, by reading someone else’s note I found the name of the peak – Unspitze. The last note was from 10 days earlier – I suppose that was when someone last stood under this cross. I added my entry and put the notebook carefully back 🙂

Did I have to descend through the same steep slope of snow on my feet? No, I sat on a shopping bag from REWE and slid my way down. Hell of a ride. 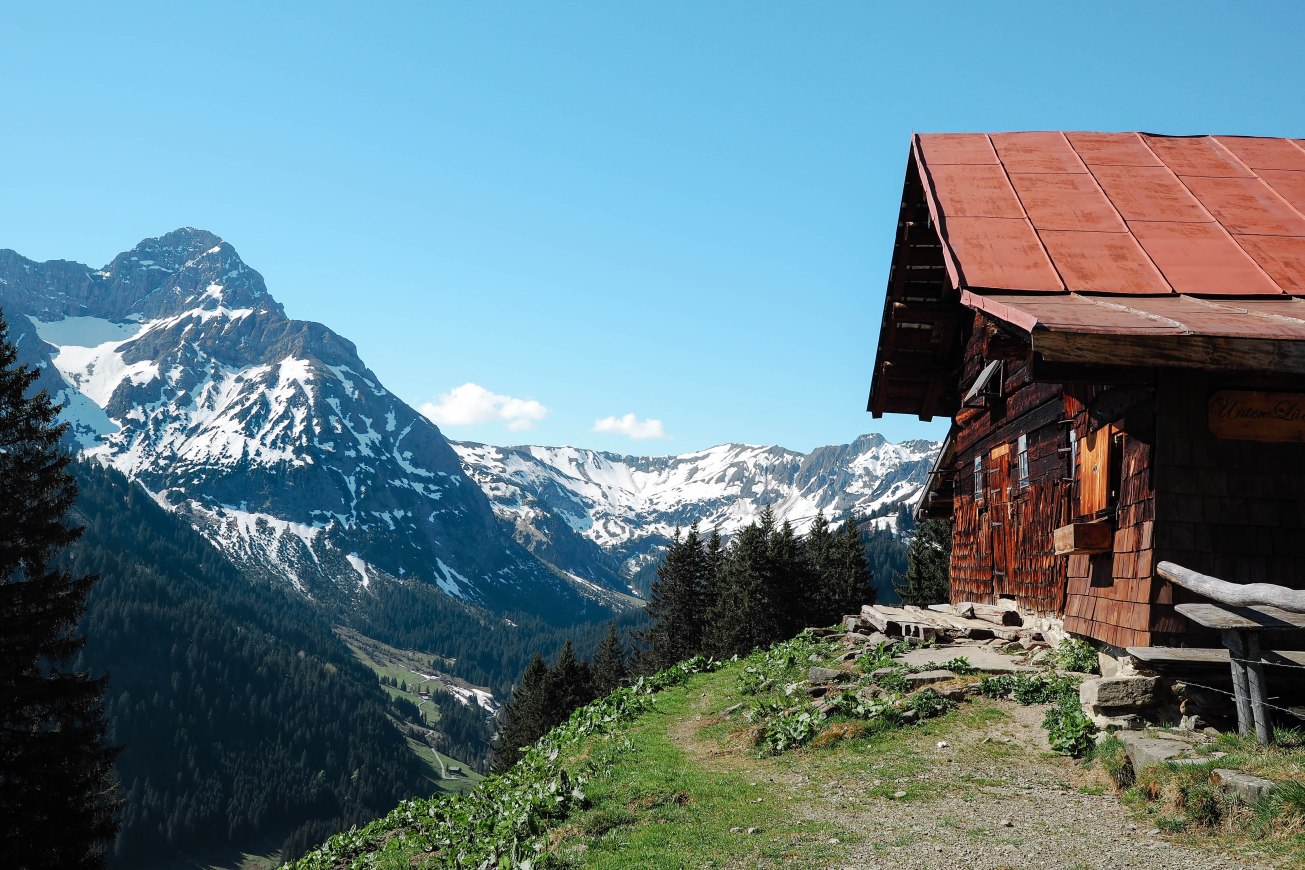 Day 3: Second day trekking! I felt energetic and ready to take on more. The objective of the day was to make a loop on another mountain next to Baad. First stop I made was at the hut on the Untere Lüchle Alp. It was quite a picturesque stop.

Mid-May, wild crocuses were in full bloom on the Alps.

Playing with the focus (a)

Playing with the focus (b)

Going further and up, more and more snow started to appear. 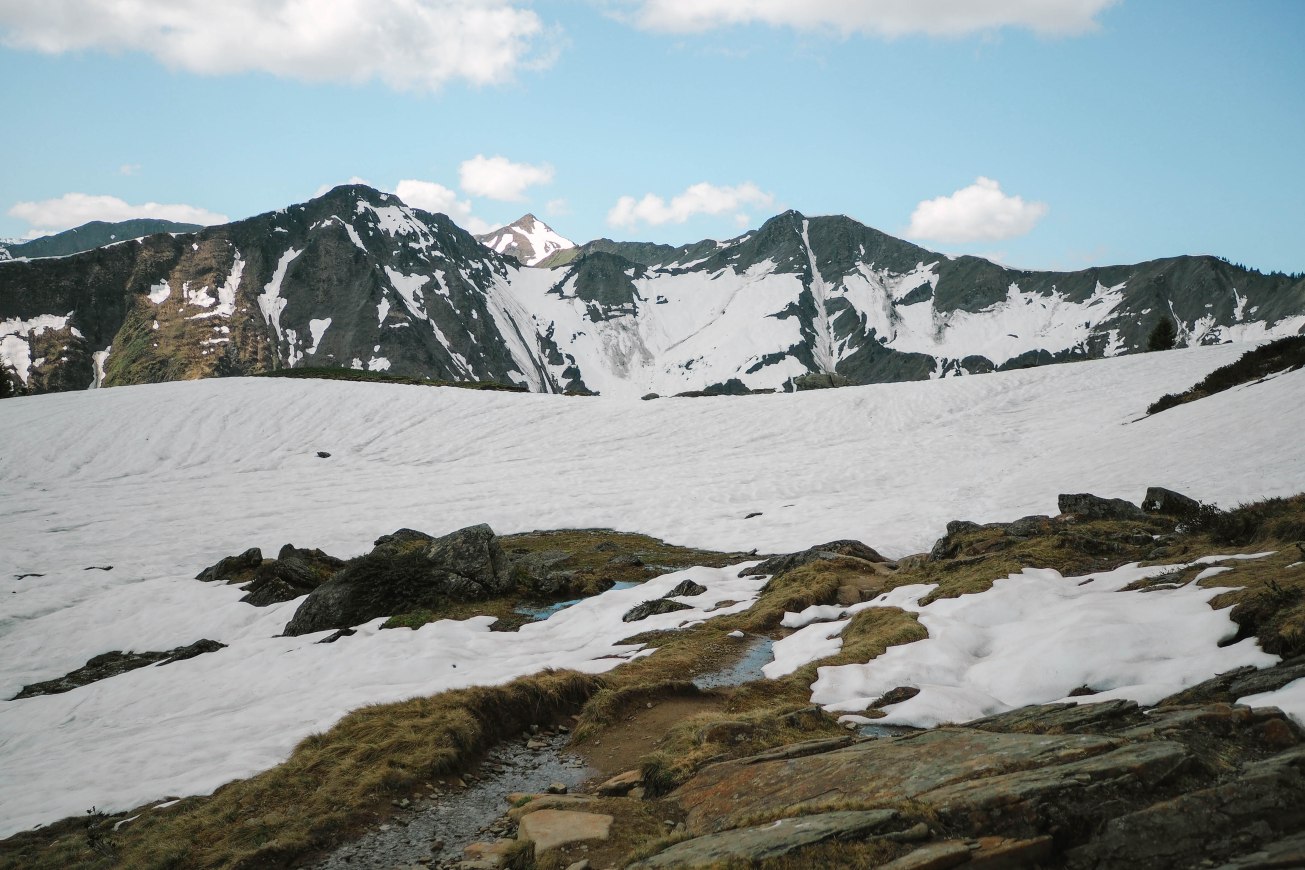 Once again, the snow covered completely the trekking path. Luckily, I could make out some old foot prints in the snow, set probably a few days ago? I followed them carefully, the last thing I needed was losing orientation.

Alpe Sternhof. I took this picture to show one of the potential problems of trekking through snow during this time of the year – it can be hollow beneath the surface. From one step to the next, you could fall into a hole – not deep enough to be dangerous, but one can easily sprain an ankle. I fell once on my left foot around this area, fortunately, no damage was done (have never sprained an ankle in my life). Only a slight discomfort which disappeared after a night of sleep. 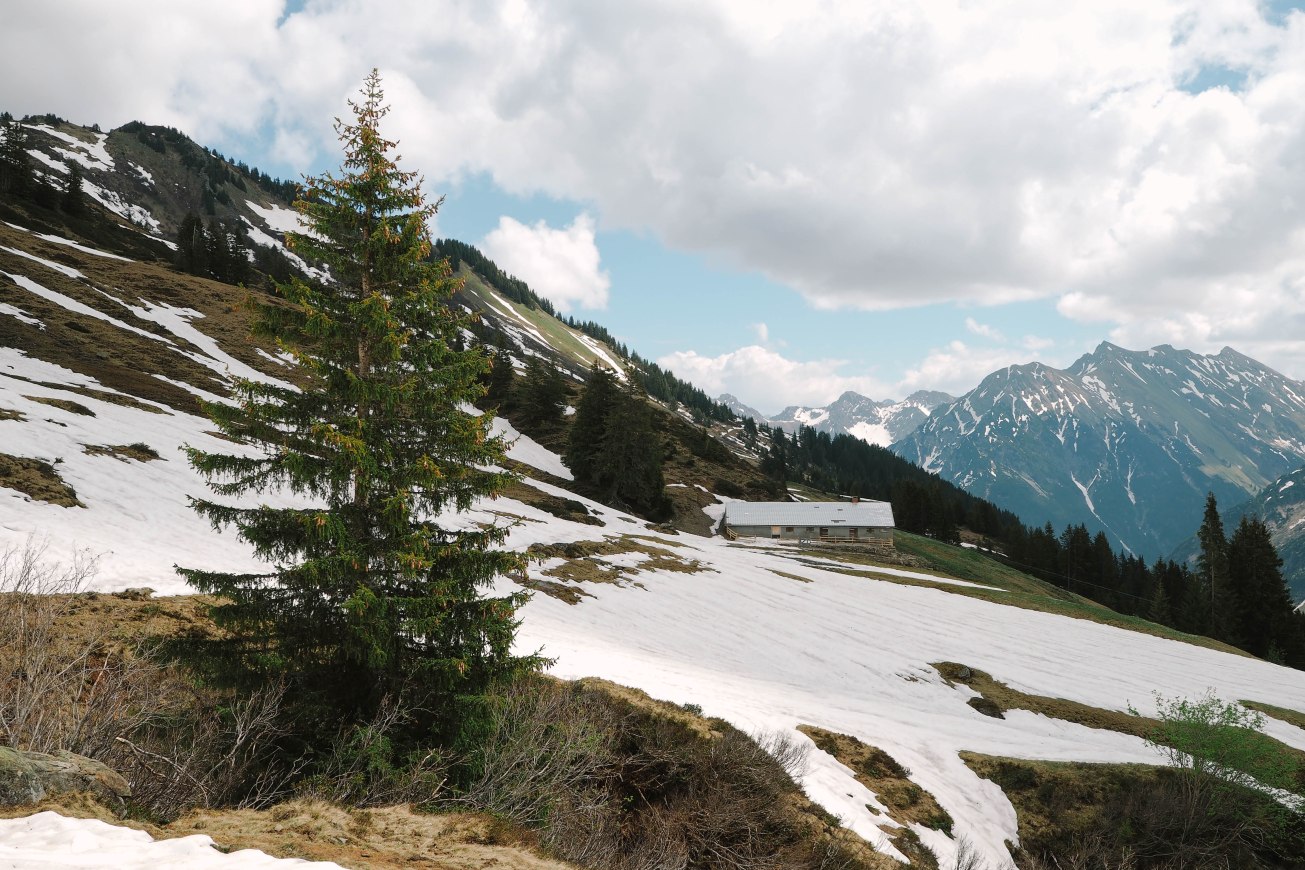 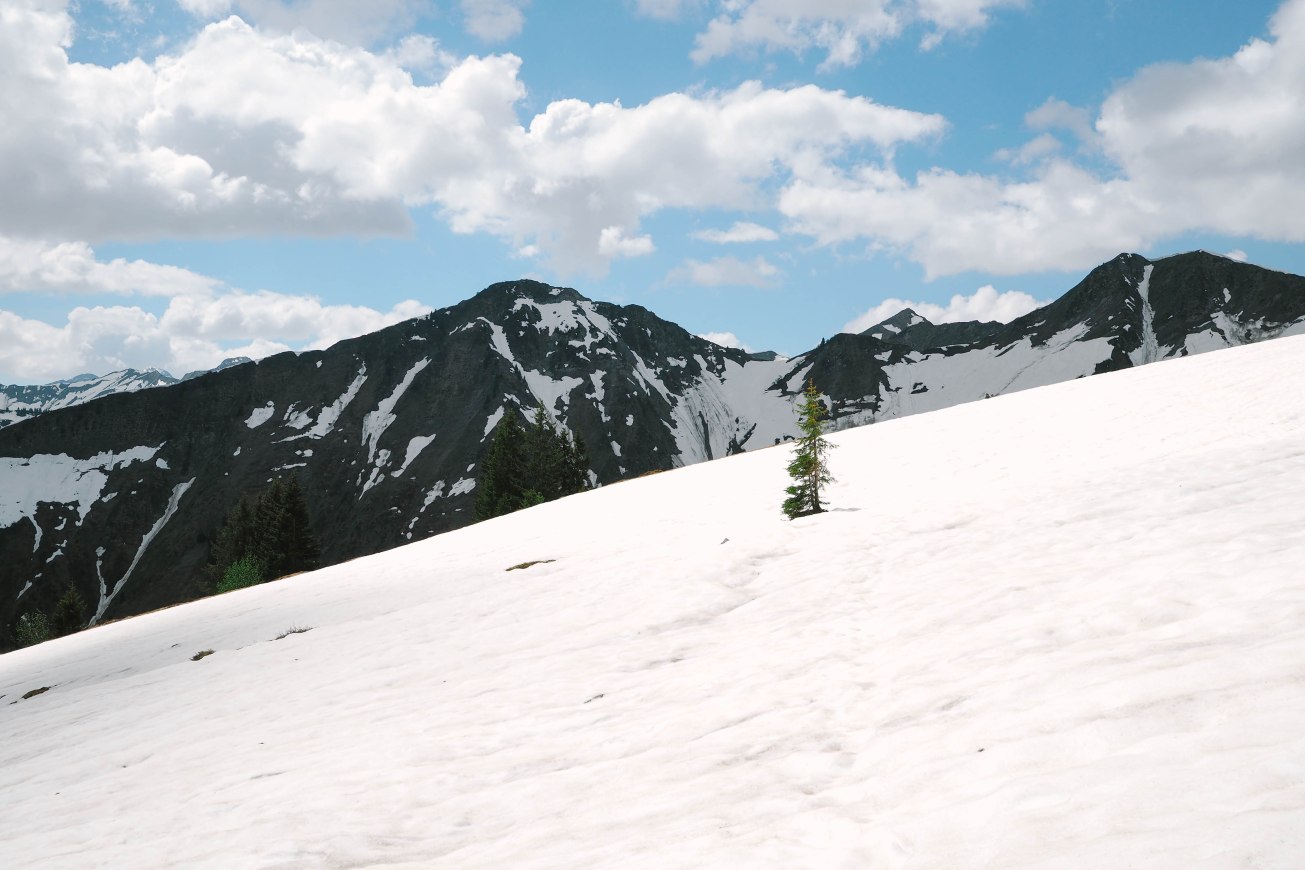 Looking ahead – a vast field of snow. 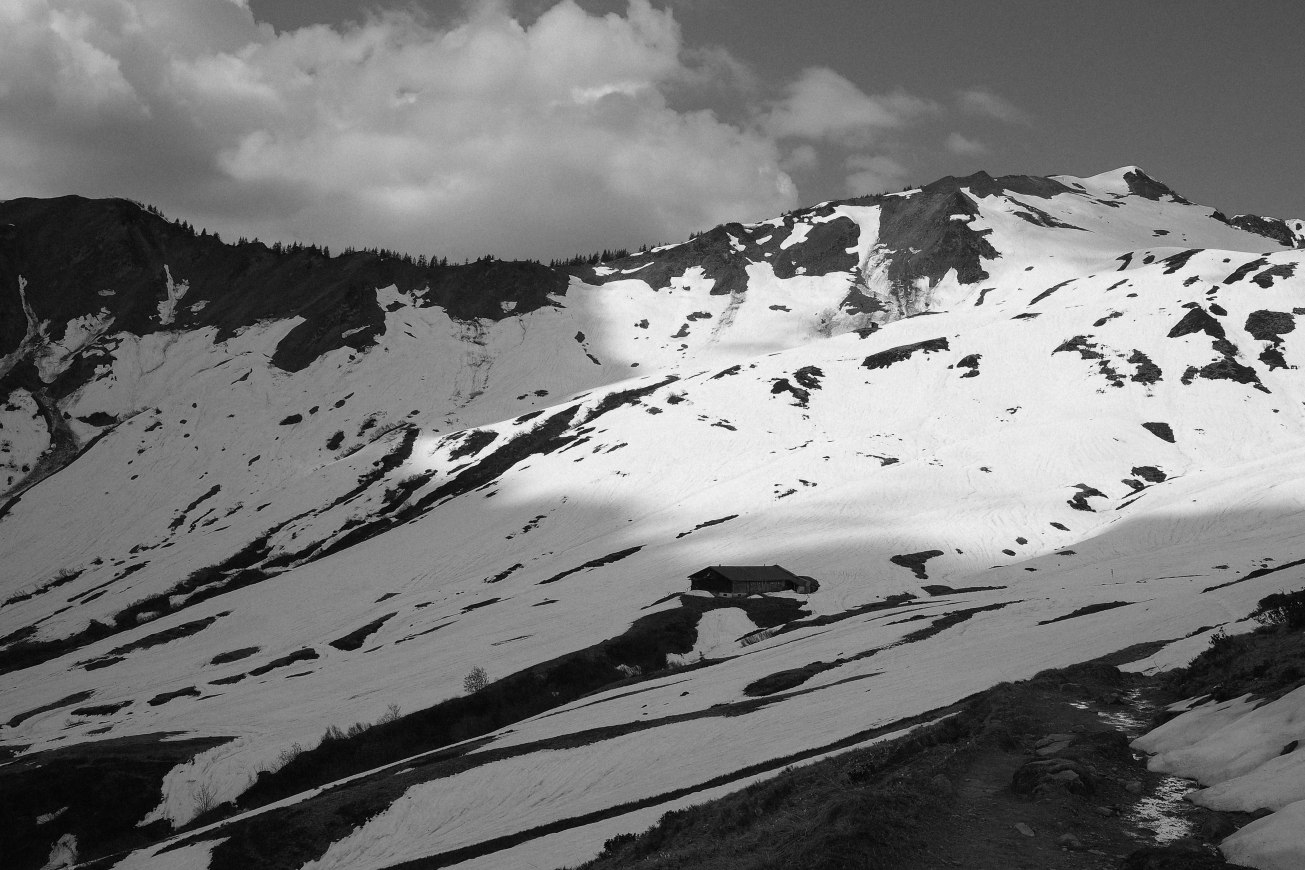 I reached the second hut on the way – Starzel Alpe. This was the last spot where I documented the day with a picture. In front of this hut, where I was supposed to start descending, there was again a vast slope of snow. No tracks, no markers, and suddenly no footprints. Due to the steep slope I could also not see much beyond, hence could only guess which direction to go on with. Then came the most nerve-racking experience, I started going down a “path” which ran so steep that I had to sit and slide – half way through, the “path” of snow turned into a waterfall… admittedly, I went down the wrong path. I stopped immediately, looked up at where I had come from – a wall of snow and ice running almost straight up. Not knowing what to think, I spent however long it took, to pull myself one step up at a time, using my poles (shortened to the minimal length) like an ice axe, all the way to the top. I cannot tell you how I felt at that moment, I didn’t know how to feel. The blood circulation to my finger tips were cut off by the straps of the poles because I was hanging onto them so tightly, some finger tips remained numb till the next morning. After some time, I found the correct path down! This time 100% without mistakes. It was not an easy way down, but I felt as if I were walking on clouds… What can I say, that was another lesson learnt and I knew it was no joking matter whatsoever. On a lighter note, there were two things that I thought of doing as I was pulling myself up on that wall of snow and ice – they crossed my mind just like that. I more-or-less did both that evening. One of them was eating a lot of chocolate chip cookies.

Day 4: After two hard days. I was determined to take the third day slow: making a 2h roundtrip in a river valley; enjoying a big, filling lunch in Oberstdorf; revisiting my favourite Kuhberg; and just browsing in the shops in town.

Kuhberg on a stormy afternoon. Would never get tired of visiting this spot.

The color of yellow, intense and creamy, like a splash of paint.

Day 5: I met up with a friend of mine from Ulm in Hirschegg, we did a relaxing tour on the mountains between Hirschegg and Mittelberg. The weather went from rain to sun and then back to rain, which didn’t bother us. We spent the whole time chatting and catching up, in the end we finished the day with Apfelstrudel and ice cream in Mittelberg. 🙂 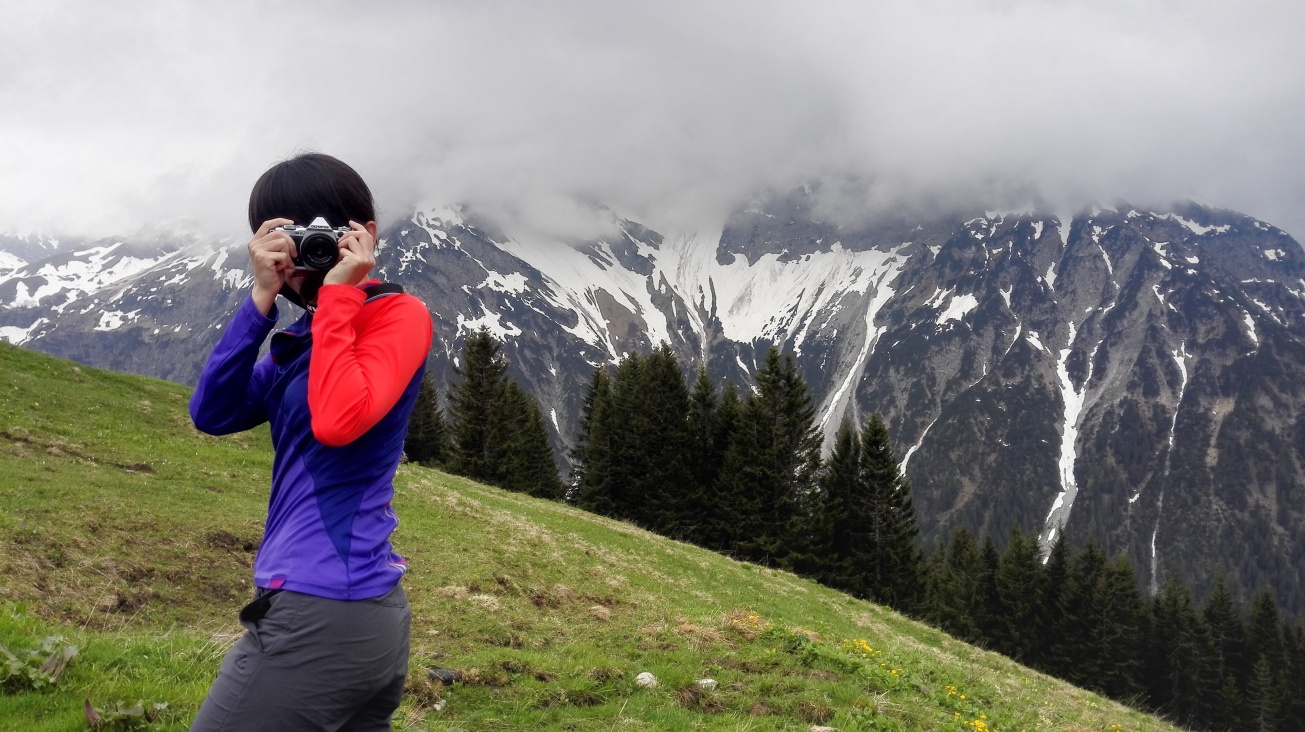 A picture of me.

Another picture of me, with the town of Mittelberg in the background. 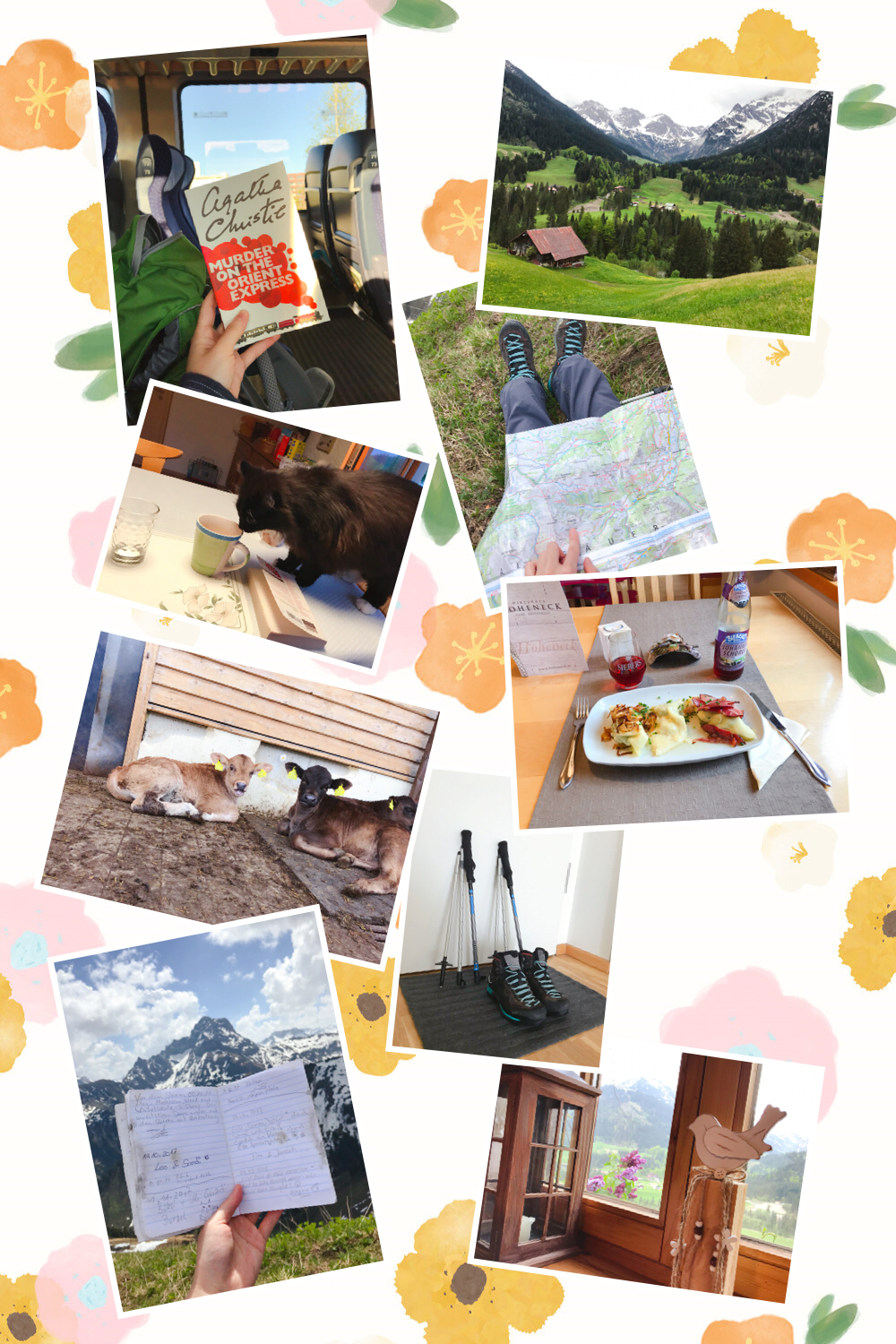 A selection of pictures from my phone (left – right): 1) The book by Agatha Cristie – perfect companion of this vacation! 2) View at the end of Day 5. 3) Lumpi the cat, right before he drank my coffee. 4) Pointing at Unspitze on the map while sitting under the cross. 5) Young cows. 6) Maultasche cooked in three different ways. 7) The guestbook found at Unspitze. 8) (At home in HH) Clean boots and poles, ready for the next trip, whenever that will be. 9) View out of the window at a restaurant in Mittelberg.